Before the American Psychiatric Association’s Diagnostic and Statistical Manual of Mental Disorders (DSM) was revised to its current 5th edition in 2013, Asperger’s and autism were considered as 2 different developmental disorders.

Today, these 2 conditions are classified under a general term- Autism Spectrum Disorders (ASD). This newer classification has sparked a debate in the medical fraternity since there exist clear-cut differences between the 2.

People with either of these conditions face a unique set of challenges. And this is probably the main reason behind the integration. However, many experts agree that children and adults with Asperger’s or autism have distinctive gifts. As such, each condition requires a slightly different approach from the other- and this calls for delineation.

We’ve heard so much about kids with autism. But what exactly is it? What about Asperger, how do the two differ? How can you tell one from the other?

Autism is pretty much a maze: the harder you try to find your way around it, the easier it is for you to get lost in its sea of vocabularies, definitions, and categories.

So, to make this an easy read for you, we are going to tackle this issue in the following order:

> Check other articles on LittleBabyGear.com <

Autism – As We All Know It

When autism is mentioned, most people create a picture of a non-talkative child with an easily detectable lower-than-average IQ. This is partly correct, but there are a lot of other things to understand here.

Autism refers to a brain developmental disorder that is generally characterized by impaired social interaction with others, established restricted and repetitive patterns, difficulties with communication, and lack of empathy,

The word autism is derived from a Greek word “autos” meaning “self”. Therefore, autism could be directly translated to “self-ism” – a condition where an individual is alienated from normal social interaction. Put in simpler words, s(he) becomes isolated from the rest.

Autism was discovered in 1911 by a Swiss psychiatrist, Eugene Bleuler when explaining a set of conditions that were pretty much related to schizophrenia.

It was not until in the 1940s that researchers in the US started using this term for children who demonstrated social and emotional problems. 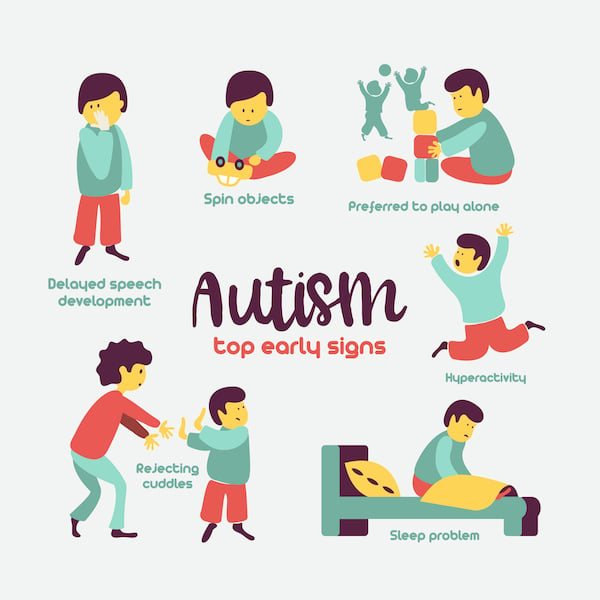 Autism is easy to detect after 2 years of age although some signs may start showing at 12-18 months. If it’s detected early enough in infancy, it might be very easy to rewire the brain and successfully reverse most of the symptoms.

The major problem, however, is that most infants with autism are mistakenly considered to be ever content and undemanding since they hardly cry. While not all kids that don’t cry a lot have autism, it might be easy to detect early signs of this disorder if you know the signs that you need to be on the lookout for.

Early Signs Of Autism During Infancy

Symptoms Of Autism In Older Kids

At above 2 years, the signs and symptoms of autism become much more conspicuous. They are also diverse and may be exhibited in the form of difficulty speech and language problems, impaired social skills, difficulties with non-verbal communication, and repetitive and restricted behavior (inflexibility).

Signs Of Difficulties With Nonverbal Communication

A spectrum refers to a condition with an unlimited set of values that can be present in different variations and without particular steps.

For instance, the color blue can be categorized into up to 76 shades including Bleu de France, baby blue, and blue. All these shades can be simply referred to as blue although they differ significantly in terms of hue and lightness.

The same case applies to autism.

Years of research has led to the discovery of conditions that are characterized by different but closely related symptoms and that vary in the way they affect different people.

Other than naming each condition differently, these conditions are grouped under one major category called Autism Spectrum Syndrome.

Since autism affects brain development, all the affected individuals who are diagnosed with it will show difficulties with communication, social interaction, empathy, and flexible behavior.

However, the degree of difficulty and the level of disability tend to vary from one person to the other depending on the exact condition that is affecting him. That’s to say that two kids diagnosed with autism may appear very different in terms of individual abilities and behavior.

The decision to address the different autism-related disorders by a single umbrella name- ASD- was to avoid a great deal of confusion that would arise when every combination of disorders is given a different name.

Understanding The Classifications Of ASD

Before 2013, there were 5 different conditions that the American Psychiatric Association (APA) regarded as Autism Syndrome Disorders.

However, 2 of them – Rett Syndrome and Childhood Disintegrative Disorder are no longer regarded as part of the Autistic Spectrum Disorder.

The 3 remaining conditions (discussed below) have a lot of similarities in signs and symptoms but they differ significantly in severity and level of impact.

That’s why some people with ASD will lead a normal life on their own and succeed in most facets of life just like anyone else would do. In fact, you may not know that they have the condition. On the other hand, others on the other end of the spectrum will have severe disabilities. Most autistic individuals, however, tend to fall somewhere between these extremes.

This is the most common and what most people think of when autism is mentioned. Also known as classic autism, people with this disorder portray a more intense level of most of the signs and symptoms of autism.

Classic autism is also mostly accompanied by an intellectual disability that involves limitations in IQ and adaptive behaviors (skills that are vital for everyday life including taking care of oneself).

Also known as Asperger syndrome or Asperger’s disorder, this refers to a condition with milder symptoms of autistic disorder.

Asperger is named after an Austrian pediatrician, Dr. Hans Asperger who first described its condition in 1944. Dr. Hans described 4 out of 200 children who had autistic difficulties in terms of integrating with others.

Similar to autism, these children did not have nonverbal communication skills and empathy and were physically clumsy.

Dr. Hans also found out that these children had disjointed or overly formal verbal communication. Their conversations were also dominated by a single topic.

However, a peculiar observation was that the 4 kids appeared to have normal intelligence levels (more about this later).

Before 2013, the 4th edition of the DSM diagnosed Pervasive Developmental Disorder NOS when an individual portrayed certain symptoms of autism that fell in between autistic disorder and Asperger syndrome. Put in other words, an individual diagnosed with PDD-NOS had symptoms that were less severe than those of autistic disorder but more severe than those of Asperger’s syndrome.

One of the major differences between people with Pervasive Developmental Disorder NOS and those with autistic disorder was that the former didn’t have personality avoidant disorder. Precisely, they didn’t have extreme social inhibition that could interfere with the way they interacted with other people.

There are a lot of similarities between individuals affected by these conditions. The similarities are actually more than the differences, and this is what makes it hard to tell one syndrome from the other. Children with either Autistic Disorder or AS may have:

Differences Between Autism And Asperger Syndrome

The signature difference between these 2 conditions is that while children with classic autism take longer to talk, there are no language delays with Asperger. Kids with Asperger welcome conversation. The only hindrance is that they find it difficult to communicate. They may seem unengaged in the conversation and also have difficulties using gestures and understanding sarcasm.

Children with autism are easily diagnosed by the time they reach utmost 4 years thanks to a multitude of early telltale signs.

On the other hand, it’s not surprising for most people to reach adulthood before they are found to have Asperger syndrome (the diagnosis is usually Autism Spectrum Disorder, though). Some of the reasons for this late diagnosis is that individuals with Asperger are neither affected by language delays nor intellectual disabilities.

Individuals who are diagnosed with Asperger may feel awkward when interacting and talking with others. They may also have difficulties interpreting nonverbal behaviors in other people.

Luckily, it’s easy to get solutions in terms of therapies and treatment for Asperger and most autism syndrome disorders during adulthood.

Most children with autism more often than not require specialized education and a good level of support.

On the other hand, individuals with Asperger syndrome can still attend mainstream school and excel academically and live independently later on.

While there are distinct differences between classic autism and Asperger, these 2 conditions have a lot in common in term of signs and symptoms.

Most of these symptoms often overlap making it hard to distinguish between one condition and the other. And that’s why there’s a higher likelihood of doctor diagnosing your child with autism spectrum disorder as opposed to either autism or Asperger.

At the end of the day, both of these conditions require early intervention. Early diagnosis and treatment increase the chances of leading a much better life including excelling in school and living independently.

The purpose of this article is informative. It is a summary of the latest research results and it’s not a substitute for consultation with a doctor. Always consult your health concerns and decisions with your doctor.