Pregnancy and everything about it tend to rotate more around the mother. In any case, she bears all the ‘weight-lifting’ before ushering the baby to its new world.

But what’s the role of the father in all these? Is he just a partner-in-production? Well, for long, lots of individual, community, and policy factors have barred the involvement of fathers (or father figure) during the gestation period and childbirth.

But recent research findings show that fathers have an invaluable contribution to the wellbeing of the expectant mother and the development of the child too.

It’s difficult to understand how it feels to grow a baby in the uterus for 39 weeks straight unless you’ve been through it.

Of course, there are several perks make this journey great; more personal space with no qualms, stopping the traffic whenever you cross the street and lots of naps. But that’s just one side of the coin.

The other side of carrying a pregnancy to term is characterized by epic horror stories of exhaustion, lower back pains, and extreme morning sickness that make the entire process an uphill battle.

While some women are lucky to have a supportive environment with lots of love and peace, most expectant moms have to endure 9 months (give or take) of painful physical and mental suffering.

These discomforts when compounded with other factors increase an expectant mother’s risk of developing an array of complications including anxiety and depression.

Depression and other related mental health conditions during pregnancy not only affect the mother. But they could also have lifelong impacts on the mother-baby relationship and the development of the child. 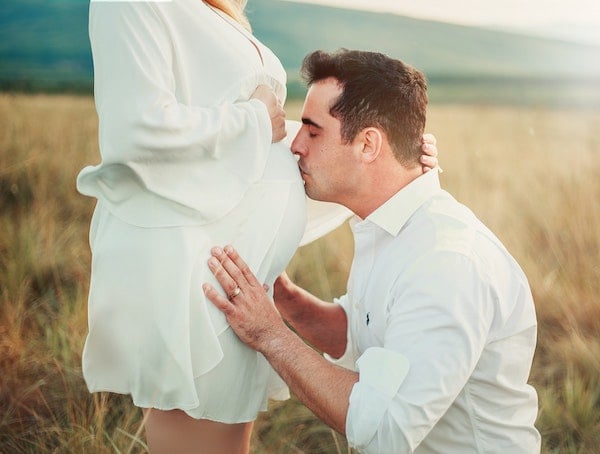 In this study, an involved father is viewed as a partner who is actively engaged in all matters concerning the pregnancy. It also involves direct interaction with the infant and being accessible and available when needed.

The sample for this study comprised of 95 self-identified African American expectant mothers down from 120 who had been approached.

The recruitment took place between 2009 and 2011 at a medical facility in Chicago. All the women selected for this study were in their second trimester of singleton, medically low-risk pregnancy.

These participants didn’t have any pre-existing medical diagnosis or obstetric complications such as pre-gestational diabetes and chronic hypertension. The researchers note that these factors could increase an expectant mom’s depression symptoms.

The data was collected twice and the women were reimbursed a total of $50 each for their time and participation.

Data collection was through a packet of questionnaires that comprised of a set of variables namely; characteristics, father involvement during pregnancy, depressive symptoms, and psychological wellbeing.

The degree of father’s involvement was measured using the participants response to the question “Is the father of this baby involved with you during your pregnancy?”.

While it does not replace a clinical depression diagnosis, the CES-D scale has been used reliably to determine high levels of depression among expectant women.

To measure the psychological wellbeing of the pregnant women, the study employed the Psychological General Wellbeing Index (PGWBI).

After entering, cleaning, and analyzing the data, the study showed that the participants had a mean age of 24 years.

Majority of them were multigravida (pregnant more than 1 time), lived with the baby’s father, did not have a college degree, were unemployed, and their annual household income was less than $20,000.

Of all the participants, 80% reported that the fathers were involved in the pregnancy. These women also reported high levels of psychological wellbeing and low levels of depression.

Still, during the first data collection 28% of the participants had clinically-relevant depressive symptoms (according to their score on the Center for Epidemiologic Studies Depression Scale).

The study also showed that when the father of the baby was involved in pregnancy, the women scored a lot of marks in terms of psychological well-being and had much lower levels of depression compared to when the father was not involved.

Generally, the results of this study point out a possible correlation between a father’s involvement during pregnancy and higher levels of psychological wellbeing on the mother.

The major limitation of this study was that it largely comprised of young, single, and unemployed African American women. The researchers argue that the results cannot be used to represent African American mothers from higher socio-economic status or pregnant women from other races and clinical settings.

Study 2: Determining The Likelihood Of Father’s Engagement In Pregnancy & Childbirth

Most scientific studies rotate around the benefits of father involvement during pregnancy and childbirth. But what’s not always so clear is who among all fathers are more likely to be involved.

In an article published in the Journal of BMC Pregnancy and Childbirth, Maggie Redshaw and Jane Henderson sought to understand the types of dad who engaged during pregnancy and childbirth and ways in which they were involved.

Also the study wanted to determine how paternal engagement impacts an expectant woman’s uptake of relevant prenatal services, how she perceives care, and maternal outcomes.

This sample for this study was 5,333 women down from the 10,000 mothers who had previously been randomly selected. All the participants were aged over 16 years and lived with the biological fathers of the baby during the survey.

Questionnaires were used to collect sociodemographic data (age, partnership status, and parity), the level of care during antenatal, intrapartum, and postnatal periods and the women’s perception of this care.

The questionnaire also collected details on the baby’s father involvement during pregnancy, labor, and postnatally. In addition, the women were asked about paternity leave and their partner’s perception of staff communication during hospital visits at each stage.

This score also measured the father’s involvement in the major aspects of pregnancy including seeking helpful information, preparing a birth plan, and making decisions regarding antenatal screening, labor, and birth.

The second score measured paternal involvement after the birth of the child. It sought to determine whether the father was involved a great deal, a bit, rarely, and not at all in activities such as changing nappies and helping when the baby cried.

After analyzing the results, 4 factors were found to determine the degree of fathers’ involvement in pregnancy and childbirth; parity (the number of births), age, ethnicity, and deprivation.

This study found out that partners of multiparous (several births) mothers were less involved than those of primiparous (single birth) women. This confirms previous findings that first time dads are more likely to be involved in pregnancy and childbirth.

On this note, the researchers say that the lower degree of paternal involvement in multiparous households may be attributed to the additional childcare required in these families.

The study also reveals that partners of mothers in lower socioeconomic levels were more likely to be more involved in pregnancy and childbirth. On the contrary, partners of BME (Black or Minority Ethnic) groups were less likely to be involved.

With regard to the view of care, paternal engagement was associated with more positive adjectives in describing the staff during labor and delivery.

The research also revealed a higher paternal involvement among women who had assisted vaginal delivery compared to those who delivered normally.

The researchers explain that there is a likelihood that these partners may have been distressed by the pain of the baby’s mother and, therefore, felt empowered to intervene.

The study shows that the partner’s involvement was associated with better postnatal health especially in multiparous women.

Women who reported paternal engagement also answered that their physical health was either very well or quite well and they also had fewer postnatal problems.

Unlike women whose partners took paternity leave, those of the other group reported being unwell or even ill at 3 months.

Benefits of Father Involvement to the Baby

Besides making the difficulties of pregnancy and childbirth a little bit bearable for the mom, it’s undeniable that father’s involvement is an integral part in early childhood development.

Most research findings reveal that father involvement impacts the child’s wellbeing, learning, and life in general.

Let’s explore the benefits that babies born to actively involved fathers get.

Research findings show that children who are born and raised in a family with an actively involved father tend to be better prepared for school and actually enjoy school life more. For instance, 6-month toddlers have been found to have much higher scores on Bailey Scales of Infant Development. They also tend to exhibit a higher IQ at 3 years.

Children raised in an environment with an actively involved father have also been found to be less likely to have behavioral issues. Research findings also show that these children tend to be more socially open, tolerant, and empathetic too.

As they grow up, children with attentive fathers are highly likely to be inoculated against drugs and substance abuse and delayed sexual activity.

Research in the USA also shows that children of uninvolved fathers have a 3-fold risk of ending up in the juvenile court before they are 18 years old.

While the mother tends to spend a lot of the time with the baby, it’s the father who is inclined to engage in active and more vigorous activities with the child.

Play is not only fun for the baby, but it also has lots of physical and nonphysical benefits that are necessary for the developing child.

Interacting with the world around them has also been found to help in managing stress and crankiness.

This one seems unbelievable at first but a recent study conducted by researchers from the University of South Florida shows just that.

This study involved examining over 1.39 million birth records in Florida between 1998 and 2005. Among other findings, the researchers found out that:

Alio, Amina P., et al. “A community perspective on the role of fathers during pregnancy: a qualitative study.” BMC pregnancy and childbirth 13.1 (2013): 60.

Allen, S., and K. Daly. “The effect of father involvement: An updated research summary of the evidence inventory.” Canada: FIRA-CURA center for families, work and well-being, University of Guelph (2007).

Carleton, R Nicholas et al. “The center for epidemiologic studies depression scale: a review with a theoretical and empirical examination of item content and factor structure.” PloS one 8.3 (2013).

The purpose of this article is informative. It is an overview of recent studies and a summary of the latest research results. It’s not a substitute for consultation with a doctor. Always consult your health concerns and decisions with your doctor.