If you are expecting, you want to take every precaution necessary to make sure that you and your baby remain happy and healthy.

Throughout pregnancy, your baby is dependent on you. They need to gain the proper nutrition to develop a healthy body. Two common factors that can affect this are diabetes and obesity.

Are you aware of how obesity and diabetes might be affecting your pregnancy?

If not, I’m here to tell you all about it. Understanding how your health affects your baby is important. Let’s take a look at some research conducted through studies on obesity, diabetes, and pregnancy outcomes.

Obesity, Diabetes And Your Baby

It is no secret that obesity is an issue that affects a large proportion of the western population. Obesity is linked to a number of serious health issues, including:

Anyone whose weight classifies them as obese is at risk of these problems – and if you are pregnant, your child is at risk of complications as well.

An interesting study by C.S. Yajnik discusses the idea of ‘fetal programming’. It was discovered that large babies are at greater risk of heart disease and diabetes if their mothers are obese or diabetic. It’s thought that chemical changes in a baby’s DNA can occur if the mother experiences ‘nutritional disturbances’ caused by these health concerns.

Fetal programming is affected by maternal:

If the aspects listed above are negative or imbalanced, your child is thought to be at greater risk of diabetes and obesity themselves in later life.

Yajnik’s study found that the periconceptional (spanning the twelve weeks before plus twelve weeks after conception) period is one of the most influential times for fetal programming, as well as the intrauterine and postnatal periods. Basically, the entire pregnancy plus a period after and even before conception. Thus, if you are planning a pregnancy, it is extremely important to be mindful of your health while trying to conceive.

Maternal nutrition is the most well-researched aspect of fetal programming. Scientific studies have found that both under nutrition and over nutrition during pregnancy can have a serious effect on a child’s health. Contrary to popular thought, low calorie intake during the first and second trimesters of pregnancy can actually leave babies at a higher risk of obesity as young adults.

Babies born at a low birth weight were found to be at risk of obesity in Yajnik’s study. A lower weight can also result in:

These factors put babies at a high risk for later developing diabetes and other related health issues. Another factor of maternal health that puts a child at risk for diabetes is vitamin B12 deficiency, which was observed by Yajnik in Indian pregnant women. Vitamin B12 has been proven to have a significant impact on fetal growth, and is therefore essential for healthy developing babies. Pregnant women should see their doctor to check their B12 levels and make adjustments if necessary.

Metabolism is the body’s way of processing chemicals to aid in nutrition. This process has a major impact on a mother’s likelihood of suffering with diabetes; and therefore their babies’ risk of obesity and diabetes.

The Pima Indian Studies featured in Yajnik’s study showed that mothers who experienced diabetes during pregnancy had children who were more likely to suffer from obesity and diabetes. These studies also found that there is no correlation with diabetes in the father and risk of diabetes in the child. This concluded that a child’s diabetes risk is linked with the nutrition and metabolism of the mother during pregnancy.

There are plenty of other significant studies conducted throughout the world that also show this link between maternal diabetes and a child’s risk of health complications. 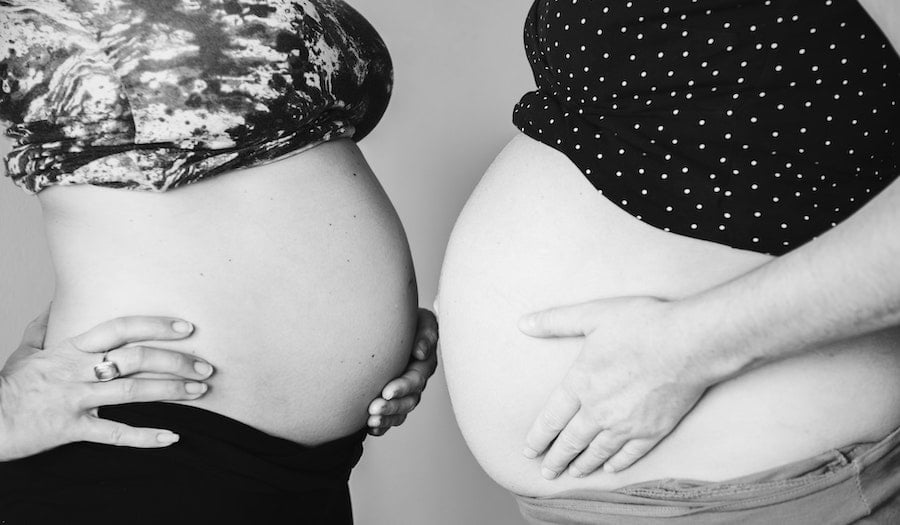 Now that we’ve gone over the ways that diabetes and obesity can affect pregnancy, let’s dive into famous studies that prove these claims.

Study: Obesity Or Diabetes – What Poses A Greater Risk?

A study in Italy by S. Bo, G. Menato, A. Signorile, C. Bardelli, et al. into 700 pregnant Caucasian women was conducted to find a potential correlation between maternal BMI and health of newborns. Out of the 700 women, 250 had gestational diabetes, 117 had pre-pregnancy diabetes, 133 were of normal weight and suffered from diabetes, and 117 were overweight or obese and diabetic.

Diabetes is certainly a factor, however weight is also a large determining factor of a child’s risk for higher weight and diabetes as they grow.

Patients for this study were selected based on a screening that took place from April 1999 to February 2001. Women who had pre-existing diabetes, a disease that affects the metabolism of glucose, or hypertension were disqualified from the study. Women were measured for height, weight, and blood pressure during the screening. A pre-pregnancy BMI was recorded, as well as waist and hip circumference.

Each woman was screened with a glucose test throughout their pregnancy. This was done by performing an ultrasound examination during the first trimester of pregnancy. Each woman was required to fast for eight to fourteen hours the night before her glucose test and the test was done the morning following the fasting.

The participants were divided into four groups:

After birth, their babies’ weight and health status were recorded. The children were divided into two groups: large weight and small weight.

High blood pressure was found to be significantly higher in both groups of overweight women, with and without diabetes.Therefore, the results of the study suggest that obesity plays the most significant role in pregnancy outcomes. The greatest blood pressures were found in women who gained more than eight kilograms during their pregnancy. The babies of these women were considered to be at the greatest risk of developing diabetes.

These results suggest that obesity pre-pregnancy and diabetes during pregnancy both play an individual role in outcomes of pregnancy. Pre-pregnancy obesity leaves children at a high risk of diabetes and mothers at risk for high blood pressure. Weight gain during pregnancy also plays a significant role in increased risk factors for children.

As a result, researchers suggest that pregnant women receive counseling on dietary needs and lifestyle changes for their pregnancy.

This is the first of three studies from article “Transmission of Obesity-Adiposity and Related Disorders from the Mother to the Baby” by C.S. Yajnik that I will discuss here.

This study was performed on Dutch women who were eating a significantly low amount of calories each day throughout pregnancy. The results found a notable link between undernutrition and a reduction in the fat cells of newborns. This decrease in fat cells leaves children at a risk for:

Regardless of the weight of the mother, it was found that a low weight at birth leaves a child at a high risk of diabetes. This provides evidence that diabetes is linked to a mother’s nutrition, rather than a genetic predisposition for diabetes as was previously believed.

The nutrition of a mother throughout her pregnancy is a fetus’ main source of nutrition. It plays a significant role in the future health of the child.

This study was conducted in India after diabetes rates skyrocketed despite a low obesity rate throughout the country. As with Study #2, the data collected in this study showed that underweight babies were left with a high risk of diabetes. Throughout this study, underweight children were studied and measured throughout their life for glucose levels and obesity.

It was found that underweight children who grew larger by the age of eight had the highest levels of:

This study suggests that babies who are born at a low weight are predisposed to obesity, diabetes, and a number of other health issues. Despite having mothers who are not overweight or suffering from obesity, the children were born with these risks due to undernutrition throughout pregnancy.

These findings were similar to the above European study, which suggests that obesity and diabetes can occur for reasons other than genetics.

Another study in India, dubbed the Pima Indian studies, investigated genetic predisposition to obesity and diabetes versus the effect of a mother’s metabolism on obesity and diabetes. This study was extremely vast and unique. In order to receive extremely confident results, every member of the Pima community above the age of five was regularly glucose tested every two years.

Scientists also studied births that occurred both before and after a mother was diagnosed with diabetes to see if there was a difference in the risk levels of children. Their findings showed that children born after the mother was diagnosed with diabetes were at a higher risk for obesity than the children born pre-diagnosis. This supports, again, that risks for obesity are correlated with the metabolism of the mother rather than a genetic predisposition.

Each child experiences the same genetic predisposition. However, only those who were conceived during the time of actual diabetes suffered a high risk of obesity.

These studies have shown that there is a major influence of obesity and diabetes on pregnancy and developing fetal health. Mothers who are obese or diabetic pre-pregnancy, or develop conditions like gestational diabetes, should take doctors’ advice on what to do and eat to ensure their babies develop healthily.

It is highly recommended that expectant mothers, or those wanting to conceive, visit their personal physician to talk about diet, nutrition and weight if obesity or diabetes affects them. Making small lifestyle changes can make a significant difference to babies’ health in utero. Consult a doctor to ensure nutrient and vitamin levels – like vitamin B12 – are optimal to decrease the risk of childhood obesity and diabetes.

Please keep in mind that this article IS NOT a medical advice. The purpose of this article is informative and it should NOT be used as a substitute for consultation with a doctor. Always consult your health concerns and decisions with your doctor.

PS. I hope you’ll find my article interesting and helpful. I also encourage you to browse around LittleBabyGear for more articles about pregnancy and parenting, and tips for new parents!